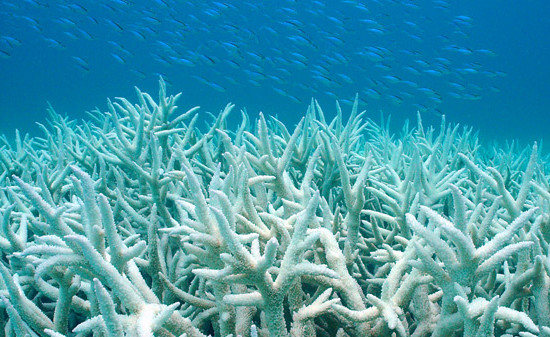 Rising carbon emissions might kill off the ocean’s coral reefs by 2050, scientists warn in an edition of the journal Science. The review article, co-authored by 17 marine scientists in seven countries, is the most comprehensive review so far of the catastrophic threat global warming poses to coral. Coral reefs have an acute sensitivity to temperature and experience coral bleaching when they are overexposed.

Burning coal, oil and gas adds carbon dioxide to the atmosphere, the same gas used to give soft drinks fizz. Just as carbon dioxide is absorbed into the drink, ocean water absorbs it from the air. When the carbon dioxide enters the ocean, it makes the water more acidic. That interferes with the ability of coral to calcify their skeletons, they can no longer grow and begin to die.

The slight warming of marine habitats along with the increase in ocean acidity have already caused the coral bleaching of many reefs around the world.  According to the Planetary Coral Reef Foundation,  the earth has already lost 25 percent of its coral reefs due to climate change.   If you have a salt water aquarium you already know how something as simple as a 3 Degree change can affect your tank.

Coral reefs are important because they act as hatcheries and nurseries for open ocean fish. They also protect coasts from storms, and provide fish, recreation and tourism dollars. It is estimated that coral reef fisheries in Asia feed one billion people. The total economic value of coral is estimated to be $30 billion.  But global warming is seriously threatening that crucial component of the ocean biodiversity, the marine scientists said.

“We have created conditions on Earth unlike anything most species alive today have experienced in their evolutionary history. Corals are feeling the effects of our actions and it is now or never if we want to safeguard these marine creatures and the livelihoods that depend on them,” said Bob Steneck of the University of Maine and co-author of the paper.

The scientists provide three possible scenarios of what might happen to the world’s coral reefs, all based on the lower range predictions of atmospheric carbon dioxide given by the U.N.’s Intergovernmental Panel on Climate Change.

In the midrange scenario, carbon dioxide levels rise to 450-500 ppm and the temperature goes up 3.6 degrees. Heat-tolerant forms of coral take over and reefs become significantly less diverse, with a decline in fish and other sea life.

In the worst scenario, carbon dioxide levels rise above 500 ppm and the temperature increases more than 5.4 degrees. At this point, the reefs crumble and half of sea life disappears. Red, brown and green algae take over, plankton blooms increase and water quality erodes. Today’s levels are rising quickly due to ever-larger amounts of fossil fuels being burned.

While coral expert Chris Langdon says it’s clear this trend looks bad for corals, he does say that to predict their total loss by some date is a little sensational. “There’s a chance that they’ll be able to adjust their physiology,” says the University of Miami marine biologist, who was not a contributor to the study.

However, there’s no question the oceans are becoming more acid. Unlike climate sensitivity “where you don’t know exactly how much the atmosphere will warm for each doubling of carbon dioxide,” ocean chemistry is straightforward, he says.

“There’s no uncertainly how much the pH is going to drop given a certain amount of carbon dioxide in the atmosphere,” Langdon says. “Everyone would agree within 1% what the pH is going to be.” When it comes to ocean acidification, “it’s crystal clear that it’s caused by humans burning fossil fuels.”

Coral reefs are already under stress due to increasing numbers of ” coral bleaching events.” When ocean temperatures rise for weeks or more, coral, which are actually tiny marine animals, expel the algae that live within them. These symbiotic algae provide the coral with a major source of food. If water temperatures drop the coral can recover, but are weakened. Too many  coral bleaching events can kill them.

With overfishing, coastal development and the pollution it brings, coral bleaching and ocean acidification, the world’s coral reefs are undergoing enormous changes, says NOAA’s Billy Causey. “Coral will survive, but will it be in the forms we know?” he says.

One hope is that the worst-case global warming scenarios don’t have to go that way, says study co-author, Ken Caldeira, a professor of global ecology at the Carnegie Institution.

“It’s a much easier problem to handle than say Hitler,” he said. “We came into WWII with biplanes and came out of it with jet planes and integrated circuits. If our society actually perceived this as a threat, we could fairly easily mobilize and respond to it.”

We are only small if we believe we are. Change happens one person at a time.

In a reef aquarium clownfish are often a fish of…

A recent front page story of the San Francisco Chronicle…

Coral Frags – the Little Bit that Goes a Long Way

CORAL FRAGS!!!!!  The answer to long term commercialization of the…