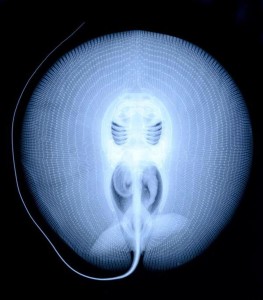 A new freshwater stingray species (photographed here as an x-ray) was discovered in 2011 in the Amazon rain forest. The discovery was made by the research team of Nathan Lovejoy, a biologist at the University of Toronto in Scarborough in Canada and Marcelo Rodrigues de Carvalho of the University of Sao Paolo in Brazil.

These fish are so distinct they are a whole new genus, the animal-classification level above “species,” the study says.

The new stingless species is known as Heliotrygon gomesi. Besides the pancake-like appearance, the ray is big, with slits on its belly and a tiny spine on its tail.

H. rosai and Heliotrygon gomesi have been sold in the global aquatic trade for years under the names  Gomes’s round ray or China ray.  But it wans’t until recently that scientists had enough infomration to declare this freshwater stingray as a new species as stated by co-author Nathan Lovejoy

Growing up to 1.6 feet (0.5 meter) long, the stingrays may be relics of a time when ocean water and wildlife inundated parts of South America tens of millions of years ago—a phenomenon supported by geological and fossil data, said Lovejoy, an ecologist at the University of Toronto Scarborough.

When the saltwater retreated, some marine species stayed, evolving into new freshwater forms. Today these animals live in an area of diverse river ecosystems that Lovejoy calls the “Great Barrier Reef” of South America.

According to Lovejoy, “Both of these guys, they sit on the bottom and wait for a fish to swim nearby.  When the fish comes near the front of the disk, [they] suddenly lift up the fronts of their disks like a garbage can lid.”

The stingray discovery was detailed in the Feb. 24, 2011 edition of the journal Zootaxa.

2016 A time to reflect on the past year, celebrate…

Coral Frags – the Little Bit that Goes a Long Way

CORAL FRAGS!!!!!  The answer to long term commercialization of the…

We Work With Brilliant Clients Wow, it is hard to…